A Wander Down the Garden Path


Being first time gardeners, we have had quite a lot to learn as of late.
Being newly responsible for the gardening last winter, we started preparing the patch for the coming season. After much googling, asking questions, discussions and numerous cups of tea, we finally came up with a plan methodically scribbled on the back of a brown envelope.

So we got to it, removing all of last seasons plants, re-planting things that shouldn't have been in the veggie patch and taking out chunks of carpet and plastic from under the earth. We had some help from the lovely Alice, on recommending techniques from her permaculture course and some Bude Haven work experience boys with preparing the ground. We covered the entire patch with manure, nettles, seaweed and mulch and let it rot down over the winter months.

When the time came, we raked off the top layer of mulch, dug the earth over and divided the patch up into vegetable beds. We spent a lot of time deliberating about what we would plant and the size and layout of the garden. Eventually, we had to go with what worked in the space available to us so as to maximise our growing potential. To do this we needed to plant vegetables which would prolong our growing season, that were easily harvested by everyone throughout the camping season, ones that could be preserved over winter and also make sure we planted everybody's favourites. We also needed to choose varieties of species that were easy to grow and would be successful despite our limited experience.

Tomatoes were a definite... everybody loves tomatoes, they are 10. We also chose spinach, which could be planted and harvested in the poly-tunnel over winter and then outside during the summer. Others included broccoli, garlic, onions, leeks, courgettes, peppers, chillies, lettuce, broad beans, mange touts, peas, corn, parsnips, carrots, pumpkins, squash, French beans, potatoes, strawberries and of course, Jerusalem artichokes. We also love our herbs, so we decided to grow a fairly large herb garden, some of which were from seed, some were given to us by our lovely neighbours and others we had from last year.

We then had to decide where to plant everything. Brassicas, such as broccoli and spinach should be planted in the same bed, so that they the crops could be rotated next year to prevent potential disease and lack of soil nutrition. From our experience over winter of digging up hundreds of Jerusalem artichokes and potatoes from all over the vegetable patch, we decided to make a separate area for these. The Jerusalem artichokes we planted far away at the top of the camping field next to our cattle trailer shelter, these also provide a great wind break during some of the British summer. Mum found a genius and space saving technique for growing in a box, so we tried this out in front of our poly-tunnel and in our forest garden, which included two different varieties of potato. After these veg were placed we generally tried to keep similar varieties together for convenience. 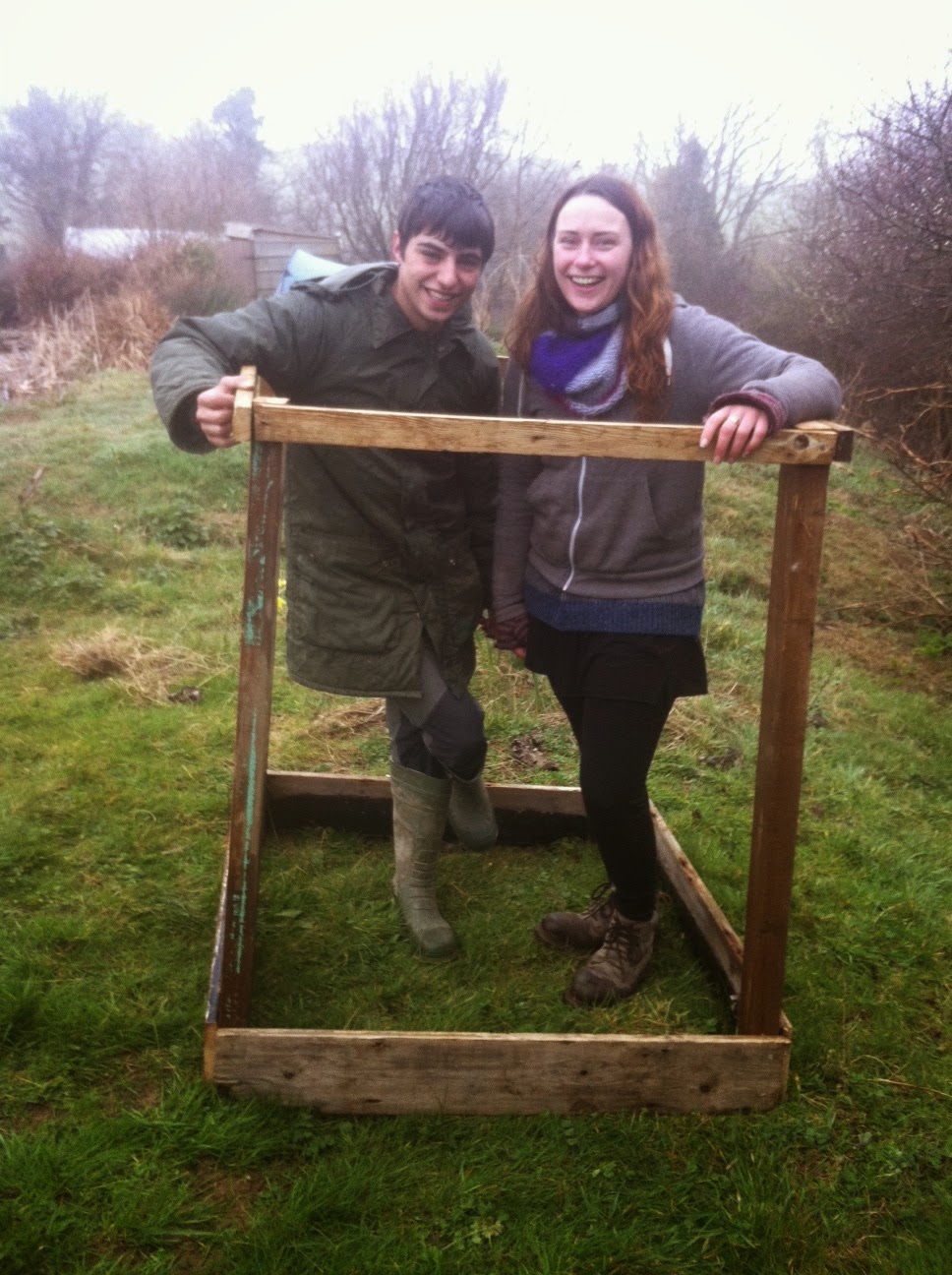 Throughout spring we planted up our seeds in the poly-tunnel, timing it from our fantastic month by month gardening book bought for us by Ben South. Our books now a little faded and watermarked from constant use with the odd added splatter of chicken poo. None of us expected the shear level of excitement when our seeds started to germinate and our veggies began to take shape. With a lot of re-potting, thinning and love, we could eventually plant them out into our poly-tunnel and outside beds as the weather improved.

We wanted our vegetables to be organic but also to grow strong and healthy, we therefore spent a lot of time on google, researching natural fertilisers, compost and pesticides. We made nettle tea fertiliser by collecting some of the abundant stinging nettles in the area and soaking them in water, usable after 4 days. We love to add this to our tomatoes and they are growing so well that we are now over run with tomato plants. Nettles are nitrogen fixing, which means they make the present nitrogen in the soil available to use by the plants. We therefore used it on all of our plants that love nitrogen, such as tomatoes, peppers, corn and chillies. We also found that coffee grounds are a great organic fertiliser. Luckily we drink a lot of coffee, so this was always in abundance and we add it to our veg every few days and then water it in. It doesn't seem to be hindering the growth, so we are just going to continue with that and hope for the best.

Early in the season one particular variety of lettuce seemed to be hosting some kind of bug. We therefore resumed our google searching and found a recipe for organic pesticide. This involved citrus rinds, biodegradable soap and water, with which we then sprayed the leaves. This was the most organic recipe we could find using the ingredients we had at hand, and it seemed to work well. Luckily none of us are too fussy about a few bugs in our lettuce.

We found some half filled compost bins in amongst the nettles at the back of the poly-tunnel that needed some attention. We dug them out, cut back the undergrowth, took out the plastic and started to turn them over to add air and
so that they would produce enough heat to compost down. We then proceeded to collect all of our un-cooked kitchen scraps and add them to one of the buckets each day. It was incredible how quickly this became beautiful compost, perfect for growing our new veg.

From the advice gleaned from many people we discovered that the most common mistake gardeners make is to overcrowd there seedlings when planting out so they do not have space to grow well and produce a good yield. We can understand how tempting this is, as we didn't want to sacrifice any of our well loved seedlings during the planting process. We therefore made a separate veg bed next to our picnic area where all of the 'left-overs' could be planted for us and campers to help themselves. We have broad beans, some herbs, leeks, tomatoes, a bay tree, a fig tree, squash, pumpkins and currents up here. It's a little more wild but seems to be producing well. We also decided to make a pea roof from hanging baskets for the shelter in front of our caravan cafe. These seem to be doing ok, although they need a fair amount of attention, but now we are able to sit and eat our lunch while picking peas from the roof.

The season isn't over yet, and there is still a lot to do. It seems weeds and grass love to grow in June, so we spend a lot of our time pulling that up at the moment. We also seem to be constantly potting up tomatoes as we got a little excited when planting the seeds and now we have hundreds of tomato plants. Anyone visiting is obliged to take away at least two with them. It's been a big learning curve, growing our own veg, and although we feel we've done well this year, there are things that we could change in the future. The proof is in the pudding though, so lets see what food we'll be eating come August.

Posted by Cerenety eco camping at 4:47 am

Well done all of you, I've never seen our veg. patch look so tidy and productive. The early crop of beans and peas have been absolutely delicious, can't wait for all those tomatoes and courgettes. Congratulations for sticking to the organic regime, you make me proud.
Mum.xx